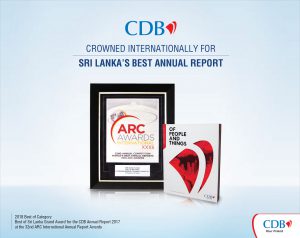 Honouring excellence in reporting with governance, transparency, accountability and placing sincerity of action into the spotlight, Citizens Development Business Finance PLC (CDB) won the 2018 Best of Category – Best of Sri Lanka Grand Award for the CDB Annual Report 2017/18 at the 32nd International ARC Awards competition held in Hamburg Germany recently. The judges articulated that the reports were judged on timely, accurate, informative and well-presented annual report geared for shareholders, employees and other stakeholders who may have an interest in the performance and activities of the organizations and to recognize and honor the organizations for the exemplary achievement in producing such a report.

CDB stood proudly as the grand winner for Sri Lanka where over 71 different agencies and corporations from Austria, Canada, Chile, Germany, Hong Kong, Japan, Luxembourg, Malaysia, Mexico, New Zealand, Palestine, Singapore, South Korea, Sri Lanka, Switzerland, Turkey, the United Kingdom and the United States had presented their annual reports as contenders.  The Grand Awards were presented by Keynote Speakers Managing Partners of HGB Hamburger Geschaftsberichte GMBH & Co, KG Christa Eickmeyer and Peter Poppe. The criteria for selection of winners included the chairman’s letter, report copy and style, design and concept, financial presentations and the spirit of the company being reflected in the overall look and feel of the annual report.

The ARC Awards, held for the first time in Europe is the the world’s only independent awards aimed at encouraging noteworthy and vital writing, as well as imaginative and original design, while also celebrating overall excellence in annual reports. It was established by MerComm Inc in 1987.